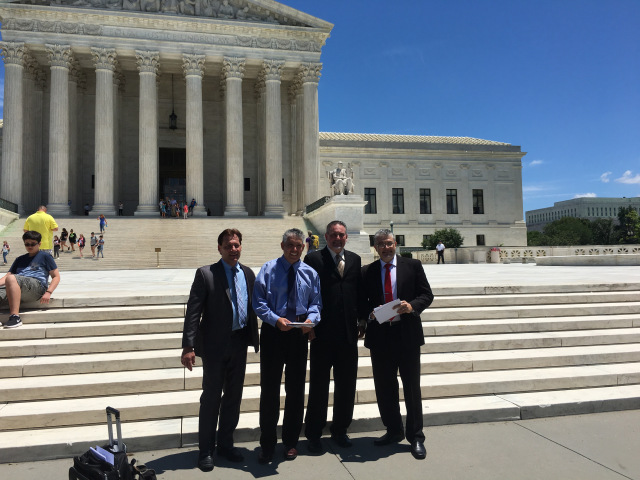 Here you will finally discover your hired gun. That’s how one front page news story described our director, Leon Koziol. He is a parental advocate with thirty years of litigation experience in federal and state courts. As detailed on other pages of this site, he has secured large verdicts, settlements and legal precedent which earned him interviews on the CBS program 60 Minutes, CNN and front page of the New York Times. But he has done much more, and now he can become your hired gun.

At some point in a divorce or family court ordeal, indeed in any court case, the abuse becomes so rampant that conventional recourse such as appeals and oversight complaints become futile. In such situations, you may have to launch a campaign to elevate public awareness and influence the involvement of outside authorities to achieve ultimate justice. Obviously this is no small task and must be done right to avert collapse or adverse media coverage. Here at the Parenting Rights Institute, we have sponsored numerous events of this caliber with profound impacts.

One such event was known as the Parent March on Washington, a three-day event designed to alert the Supreme Court, members of Congress and the Justice Department of a silent epidemic in America's divorce and family courts. Conducted on May 1-3, 2019, it featured an organizational and planning session on the first day, a lobby initiative in Congress on the second, an expert speakers event at a congressional ballroom on the evening of that day, a march under police escort from the White House to the Supreme Court on the third day, and a candlelight vigil that evening in front of the Capitol building to commemorate the lives lost to dysfunctional courts.

This event involved victims and parent advocates from across the country seeking congressional hearings and a federal investigation of these courts. The goal was to achieve a sting operation of the kind in Chicago known as Operation Greylord. It resulted in the convictions of nearly 100 judges, lawyers and officials for bribery and other criminal conduct. Our event required permits from various agencies and a major venue to host speakers and media conferences. With a fledgling budget that was quickly exhausted, and organizational requirements supervised by our director, the entire event was completed without incident.

The affair was especially beneficial to attendees who had felt isolated and operating alone in their respective ordeals. So moved were the participants that one of them, a Philadelphia attorney, produced a video summary that was made available on You-Tube and other social media. That video can be viewed below. Such events, sponsored by lobby groups, special interests or private corporations, could cost hundreds of thousands of dollars. Here we can arrange one that can grow financial contributions as experienced with the Parent March on Washington.

If this kind of approach to your ordeal is appealing, contact our director at (315) 796-4000 for a logistics consultation and cost estimate.

2008 television clip depicting Dr. Koziol’s achievements as a trial attorney prior to founding the Parenting Rights Institute in 2010.